Reflecting specifically on the idea of ‘distributed cognition’, and what this might mean for education, brought me across an article where Hayles (2008) discusses the idea in context of ‘slippingglimpse’, a verbal-visual collaboration involving a videographer, poet and programmer and consisting of videos of moving water associated with scrolling poetic text.

Amongst other things, Hayles (2008: 23) discusses the ‘collision/conjunction of human and non-human cognition’, as well as ‘non-conscious parts of cognition’. One example of the latter might be a musician who has learnt a piece ‘by heart’ and ‘knows the moves in her body better than in her mind’ (I remember the phrase ‘muscle memory’ from piano lessons!).

She also discusses the ‘non-conscious performance of the intelligent machine’ (for example, learning from ‘computed information’), as well as ‘the capacity of artificial evolution for creative invention’ (such as using image-editing software).

Another example is reading, which some describe as ‘a whole-body activity that involves breathing rhythms, kinaesthesia, proprioception, and other unconscious or non-conscious cognitive activities’ (Hayles 2008: 16). The work ‘slippingglimpse’ itself ‘requires and mediates upon multimodal reading as a whole body activity’ (ibid.: 18).

While I am still processing the implications of these ideas for education (particularly the way they complicate individual agency), these examples have certainly been food for thought and helped me to think beyond the Cartesian mind/body dualism!

Slippingglimpse exemplifies how distributed cognition is being imagined and instantiated in contemporary electronic literature. slippingglimpse is a verbal-visual collaboration between a poet, programmer, and videographer. Each of the ten parts consists of a video of moving water associated with a poetic text that can be conventionally read in split-screen format as it scrolls upwards. 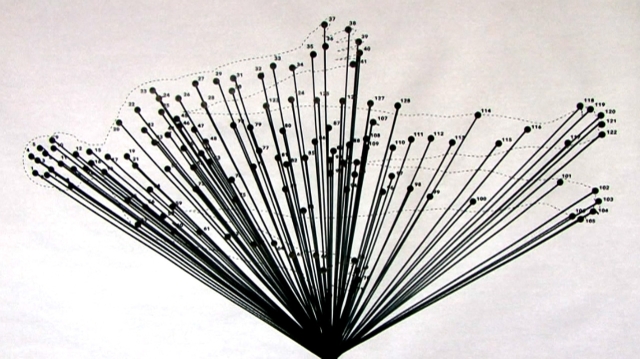 Reading N. Katherine Hayles’ Unthought (University of Chicago Press, 2017), I’m struck by her notion of ‘cognitive assemblages’ to describe human-technical interaction which she discusses as fully imbricated. I wonder if the women and men whose careers in technology-driven work contexts we are exploring in Nordwit understand themselves as cognitive assemblages? In Hayles’ work agency is distributed, as are many other things such as responsibility – but do our research participants think of themselves in that way? The people I have interviewed in the context of Digital Humanities tend to take a rather instrumentalist view of technology, and we might want to ask, what difference does it make if you understand yourself as a ‘cognitive assemblage’ or as someone who makes use of technology – or, as academics can often feel, as a ‘victim’ of technology (the skype in my office isn’t working, we’re unable to project images etc.)?

“This talk discusses the relation of nonconscious cognition to consciousness/unconscious, which I call the modes of awareness. It develops the idea of cognition in technical systems, particularly computational media, showing how principles of selection and specification of contexts lead to the creation of meaning out of information inflows/ingresses and outflows/egresses. It discusses the relation of agency within technical systems to human agency, arguing for a model of “punctuated agency” analogous to the “punctuated equilibrium” proposed by Stephen Jay Gould and others. It proposes the idea of “evolutionary potential” as a way to talk about trajectories of technological developments, arguing that computational media have a greater evolutionary potential than any other technology ever invented by humans. Finally, it argues that technical cognitive systems are interpenetrating human complex systems so pervasively and ubiquitously as to change the nature of what it means to be human, and the challenges that this interpenetration poses particularly to the humanities.”

‘An interview/dialogue with Albert Borgmann and N. Katherine Hayles on humans and machines’

Question: This email message, like most of the email found in the inbox of your computer’s email program, was written and sent by a person, and not by some disembodied intelligent machine. However, these days, it’s possible to imagine that this message was machine-generated. In your books, Holding On to Reality and How We Became Posthuman you both discuss how we got to this point. Could you summarize briefly, as a place to begin?