Major crises, such as covid-19, make paradoxes and tensions in society more salient. I wish to close this course with two that have been central to this lifestream.

Let me now reflect more on this lifestream as an artefact co-constructed with the support of algorithms. Automation failed me a little (e.g. my comments not appearing in my lifestream) and I feel I missed out a little, during block 2: maybe I have already written too much on ‘communities’ as an academic, or maybe it was that I felt it hard to again try a MOOC, or maybe I just had less headspace because of travelling. Anyhow, more interesting is probably that feeling that, overall, I have tried to resist algorithms (Beer 2017). Opting-out of Twitter was one such acts of resistance, but I am a prisoner of Google recommendations (even with all the obfuscation tools installed on my browser) and echo chambers on Pocket and YouTube (as experimented in my artefacts).

What strikes me in my lifestream, and perhaps this is in part testament to my difficulty of embracing the open space (à la Manifesto to Teaching Online) in which it sits, is the level of edition and curation that I did (and so did many, but not all to the same extent, of my excellent classmates). However, this is maybe more our acknowledgement of the entanglement of agencies and the assemblage of socio-materialities (Kitchin 2017) that stubborn Luddism. Maybe the algorithms and indeed making us cyborgs, and it is not that terrifying.

This should have happened earlier… but I have finally cleaned my lifestream (slightly). The categories correspond to the main building block of this course -so the broad thematic activities as well as type of assignments or source. The tags are the key themes.

A quick work on two things that happened to my lifestream:

I just realised my RSS feed didn’t work, well it did work but only for some lifestreams, I am not too sure what happened as I did do some tests but anyway… here are just a few of the comments I made, already some weeks ago, on the algorithmic play of some others…

Nice thought-provoking piece! I quite like the approach, really cool idea and a clear evidence that there are many different ways of research algorithms (how did you mobilise such network, that’s an impressive effort). And yes, that’s a nice pandemic map 😉. What I find striking is that both Python and Feminism lead to similar results. I guess Python was to be expected, but feminism maybe not so much… it would be interesting to repeat the exercise and ask about not the first five results but, say, the results between 20 and 25. In my exploration of YouTube, I found that the first results are indeed the same when varying the profiles -maybe because of self-feeding bubbles or the powerful interest behind them- but then they diverge later on… but then who looks at results ranked 20-25!

This is really impressive, Michael, very thorough pieces of work and a polished reflection on top! I like how you connected different issues…. and went all the way to the idea of progress, and, without naming it, the Silicon Valley ethos. I don’t know if you have read about the Californian ideology, a term coined 25 years ago by Barbrook and Cameron (the original essay is here http://www.imaginaryfutures.net/2007/04/17/the-californian-ideology-2/) –it still seems an apt depiction of your experience on Coursera and other platforms: a paradoxical mix of universal, left-leaning liberalism (the Coursera vision) and hopeful technological determinism (hence the focus on technological courses?). I think Kitchin’s paper (forcing us to go beyond the technical) is indeed a great entry point to unravel some of the ‘hidden’ ideology.

This is a really exciting piece, and there is so much into it, it really shows super hard work and I am really impressed by the way you have disentangle the different elements of no less than four major websites. I quite like the idea that some of our agency being taken away by the algorithms. At the end of the Netflix and Amazon bits, you worry about the monetisation of education by online platforms (datafication, in line with Williamson and others). I can’t agree more but I wonder: what do think would be the right regulation mechanism? Is it about regulation?

From the French-German ARTE.tv – this is great (but iframe doesn’t work)

What exactly are algorithms and how do they affect politics and civic society? Are they ideologically neutral or can they be manipulated? Raphaël Enthoven discusses with Italian political journalist Giuliano da Empoli and algorithm expert, Aurélie Jean. 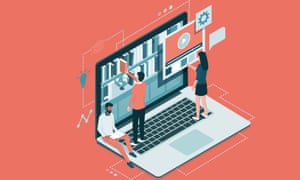 With 850 million children worldwide shut out of schools, tech evangelists claim now is the time for AI education. But as the technology’s power grows, so too do the dangers that come with it. By For a child prodigy, learning didn’t always come easily to Derek Haoyang Li. via Pocket https://ift.tt/2Wx4nHA

from
Comments for Jiyoung Kwon’s EDC lifestream https://ift.tt/2UtfaQP
via IFTTT

This is not really my last post, more of an in-between reflection about some of things I have been posting recently on nudging (and also some of the stuff I read on Valerian’s excellent lifestream – http://edc20.education.ed.ac.uk/vmuscat/), and then obviously the coronvirus debacle and especially the recent u-turn in the British approach (which seem to mark a decline in the influence of the nudging unit in the coronavirus reponse).

Two thoughts on nudges then, trying to circle back to education:

It started with geotracking. As smartphone owners realized we were being tracked, privacy concerns flooded our consciousness. Some acquiesced: Who cares if I’m offered a coupon while walking by a store I like? Most outrage has been tamped down by the addictive nature of the device. via Pocket https://ift.tt/2GAxK4M
At the end of the twentieth century, the long predicted convergence of the media, computing and telecommunications into hypermedia is finally happening. via Pocket https://ift.tt/1neRqsF